Edgar and Emma: an excerpt

Alas, I’ve only made incremental progress since announcing the project, because as a freelance writer I’ve had to set it aside whenever paying gigs have presented themselves. And they’ve presented themselves frequently lately…though without paying quiiiite enough to enable me to make any real commitment to Edgar and Emma.

So I’ve decided to mount a Kickstarter campaign to raise funds to let me do just that. I’ll furnish the relevant details here, once the campaign is live; but as a precursor, I thought I’d give you all a glimpse at how Emma and Edgar has been progressing. Hence, the excerpt below.

But first, a few words about our dramatis personae:

Emma is the daughter of a baronet, Sir Godfrey Marlow, who has just moved his family back to Malhurst, the Sussex neighborhood of their early childhood. Emma has many fond memories of this place, particularly of a very intense young boy, Edgar Wilmott, who once, when they were both eight years old, rescued her from an encounter with a very long (yet entirely harmless) snake.

In the interval, Edgar has gone on to study Classics at Oxford, and now desires nothing more than to pursue an academic career. His dream is to produce a new English translation of Plutarch’s Lives, which pairs biographies of great Greeks and Romans…and also to add a third chapter to each entry, focusing on a corresponding British statesman. But these scholarly ambitions are thwarted by his wealthy father, who has decreed that as the eldest son, Edgar must instead inherit and run the bulk of the Wilmott estate.

Edgar’s dashing younger brother Ralph, meanwhile, has set his sights on social advancement, and sees the nubile young daughter of a baronet as just the ticket for his first step up the ladder. Edgar knows of Ralph’s self-interested plans for Emma, but can’t bring himself to declare himself in his brother’s place; he’s too shy, and too uncertain of his own qualities.

In the meantime, Edgar himself is pursued by Alice Nesmith, the grasping young daughter of the local vicar. Alice scorns country life; she wants London, and she wants money. Edgar, the educated son of a very rich man, can furnish her with both.

The only other character to feature in this excerpt is Emma’s aunt, Mrs. Curtis—a comparatively young woman who at a tender age married a much older man, so that she’s never had a proper outlet for her girlish need to flirt and be coquettish. Now she funnels all this stored-up sexual energy into her niece. Mrs. Curtis’s chief aim is to see Emma married to handsome, debonair Ralph Wilmott.

In the excerpt that follows, Emma and Mrs. Curtis have come to Malhurst town to do some shopping. They’ve no sooner arrived than they bump into Alice Nesmith. The three women saunter up the high street together. 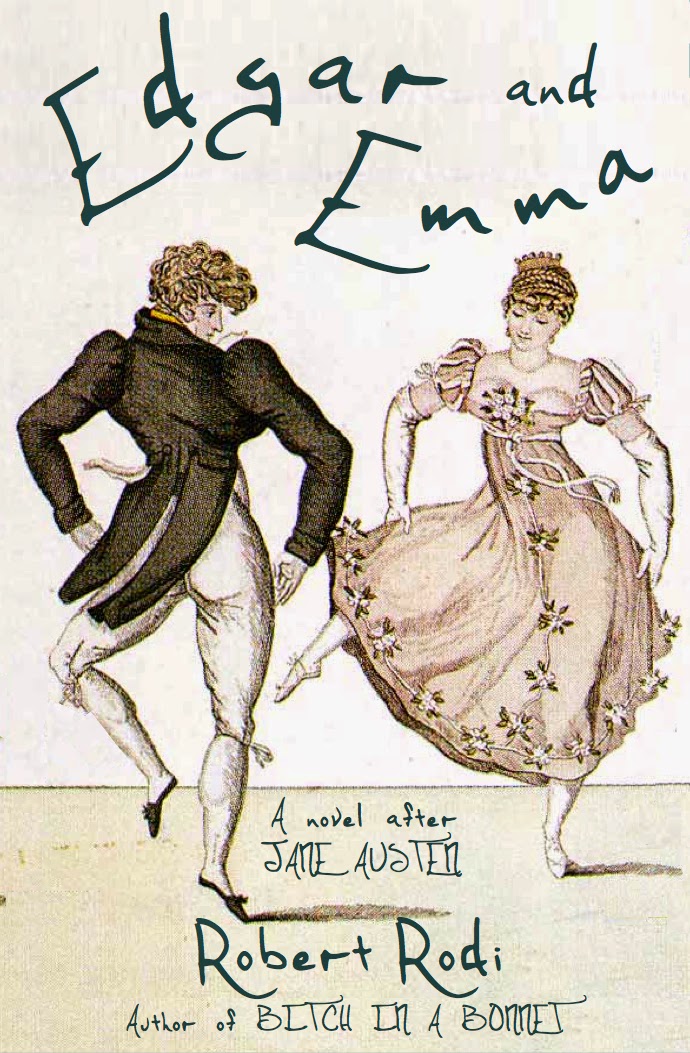 Wishing you a Bitchin' New Year

Welcome to 2015, everybody! I'll be in touch a little more regularly, beginning soon (he said cryptically). Meantime, to start the year with a laugh, here's a great sketch from the wonderful comic Jane Horrocks (best knock as Bubble in Absolutely Fabulous), which in my humble opinion is only a little bit wilder than the juvenile Jane Austen. Well...okay, maybe a lot wilder. But closer to her anarchic spirit than Merchant & Ivory, in my humble opinion. Anyway, enjoy!